When the PM said her actions were guided by her Christian faith ( http://buff.ly/2gFWHey ) the reaction from most right minded people was to laugh.

Following extensive research we can announce that in at least 8 areas Mrs May does indeed seem to draw upon Biblical precedent.

Samson was the peoples’ favourite and their protector. They loved him. Dalilah said she loved him too. But while Samson was distracted she got to cutting. By the time it was too late he realised she had taken all his strength. It was only then that it became clear that her plan had always been to offer him up to his enemies to be devoured. 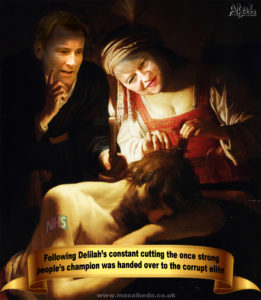 When Mary (who was with child) and Joseph tried to find accommodation in Bethlehem they couldn’t find anywhere to stay. They did approach a letting agent but were turned away. Rumour has it they were told, “I’ve already made 200 000 children homeless for Christmas so what makes you so special?”

After a decade of terrible working conditions with no reward Moses asked Pharaoh to give his people a break. Instead he made their lives even harder (akin to cutting their Universal Credit payments by £2350). What Pharaoh didn’t bargain on was the resulting plagues that swept the country (like a swarm of right wing populism) 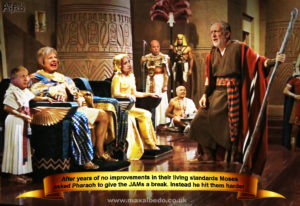 To be fair, the snake in the grass only really Expressed (on a Daily basis) what Eve and Adam were already thinking – consume Apple and all knowledge (and of course power) will be ours. What they should have seen coming was that their brave new world would be one where people would seek to conseal their identity from all prying eyes and find privacy by hiding in a bush. Ah the good old law of unintended consequences. 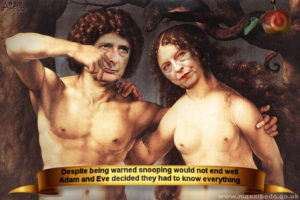 Faced with a complex issue Pilot decided to give the crowd a binary choice. Having been whipped up by the lies and prejudice of some influential agitators the people made their decision by a narrow margin. Despite it being the opposite of what Pilot had argued for he washed his hands of any principles he might have had and cynically pursued the hardest outcome available. 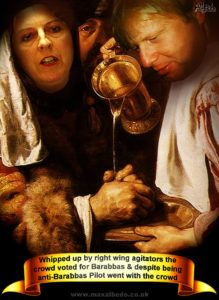 Foolishly some not so wise men told Herod that they knew of a child from humble beginnings who was going to grow up to threaten the establishment. In order to protect the elite Herod selected a load of children and made sure their future prospects were bleak. 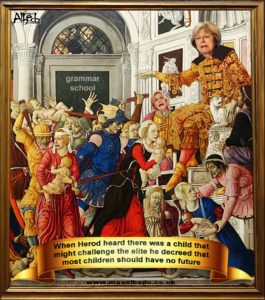 Salome was in hock to a corrupt elite. She derived her power from them and danced to their tune. When John the baptist came out of the wilderness exposing how corrupt they all were Salome’s pals did as she asked and cut off his head. 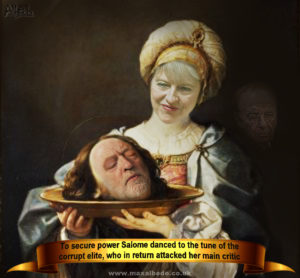 At the top of the mountain Satan told Jesus to stop worrying about the poor and welfare. Greed is good and tax is bad. Concentrate on yourself and all the wealth of the world can be yours (and I’ll see to it that HMRC look the other way). 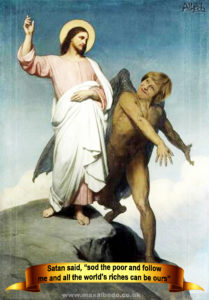